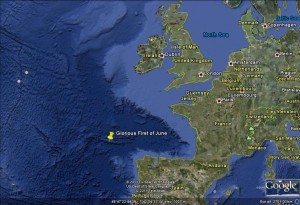 The Glorious First of June is rare for a naval battle because it is named for its date and not for its location. That is because it was fought 140 leagues – or 400 natuical miles –  south west of Ushant: there was no nearby headland or river to give it its name. This map shows just how far out to sea that was – and particularly how far it was from a British naval base. Admiral Howe certainly had his work cut out getting the damaged ships and his prizes back to Britain.